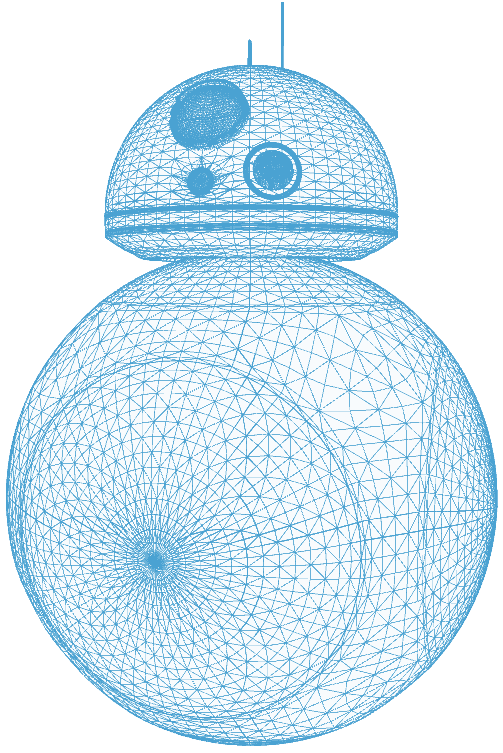 BB-8 is an astromech droid that appears on Star Wars Episode VII - The Force Awakens. It has a ball shaped body and a domed head that resembles that of the R2 series droids, whose most popular unit is R2-D2. BB-8's body rolls independently from the head, which always stays near the vertical axis of the droid.

Like the R2 series, BB-8 also fits in the droid socket of an X-Wing starfighter. Specifically the T-70 x-Wing fighter model used by the Resistance thirty years after the Battle of Endor. Despite what most people thought before the movie was released, BB-8 is owned by click to reveal spoilerResistance's pilot Poe Dameron.

"There were a lot of discussions about how having a CG BB-8 would be so much easier, but we also knew it would be better for the film, for the actors, for the sets, for the look of it, if it were performed" -J.J. Abrams

Director J.J. Abrams went old school during production of The Force Awakens. The original trilogy, which mainly used real sets and props, had a special vibe that was missing in the prequel trilogy. Abrams wanted Episode VII to feel organic and tactile, closer in spirit to the original movies. To achieve that, they used as many practical effects as possible, and BB-8 was no exception.

The first known sketch of BB-8 was revealed during Star Wars Celebration 2015. It certainly wasn't a Ralph McQuarrie illustration, but the concept might be his. In an interview with Star Wars Insider, the artist responsible for the original trilogy concept art, said that he originally envisioned R2-D2 as a rolling droid. According to Episode VII producer Kathleen Kennedy, the film crew looked a lot at early concept art by McQuarrie during pre-production and some unused concepts have made it to The Force Awakens.

The idea of a rolling robot was cool but complex. How do you bring alive a droid like that? CGI would have been the logical choice, but J.J. wanted a real prop. The Pinewood Studios' Creature Shop took on the challenge and eventually succeeded at building and puppeteering BB-8 in the film. 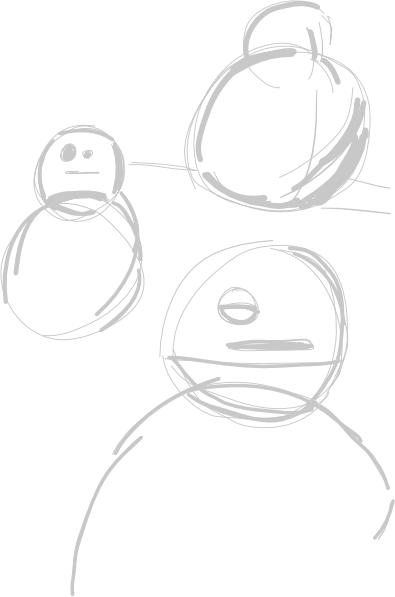 "I think Artoo was just described as a small robot. I thought of him as running on a giant ball bearing - just a sphere, a circle, wheel-like. He had gyros so he could go in any direction on this ball." -Ralph McQuarrie

So, how does BB-8 work? What kind of black magic powers it? Well, what we know for sure is that it's not driven by a hamster as some theories suggest. The closest thing out there is the Sphero ball, and turns out that Sphero was one of ten start-ups funded by Disney's first accelerator program in 2014. Disney CEO Bob Iger himself was Sphero's mentor inside the company. When he learnt about the filmmakers trying to build a rolling droid, he knew the right people for the job.

BB-8 and the Sphero are likely to share a very similar internal mechanism. The RC robotic ball uses a gyroscope to determine which way is down and two wheels to move the sphere from inside. The base plate (batteries included) serves as a counterweight to keep the wheels acting against the lower half of the sphere. There's also a vertical bearing that helps to keep the wheels in contact with the walls.

But what about the floating head? Because that's actually the jaw-dropping part. There is a patent by Disney's Imagineering R&D group that sheds some light on the head mechanism. Surprisingly, the patent was filed in 2010, two years before Disney acquired Lucasfilm and four years before they invested in Sphero. Looks like they were into rolling droids before anyone suspected.

Note: According to the latest updates from Lucasfilm, Sphero's technology wasn't useful to achieve the expressiveness that the character demanded. Therefore the Creature FX engineers had to develop their own mechanism to make BB-8 behave the way Abrams wanted.

The first thing we have learnt from this patent is that there is a concept in robotics called holonomic motion. Ground-based holonomic robots are those who can instantaneously move in any direction on the horizontal plane. That makes them incredibly responsive. Both the Sphero and our little guy BB-8 are holonomic robots.

The patent presents several variants of the invention, but one of them is suspiciously similar to BB-8. According to this configuration, the body contains a drive system that always keeps a relative position with respect to the sphere. The system uses omni wheels to make the sphere roll in any direction. Each of those wheels is connected to a motor. The robot uses sensors (gyroscopes and accelerometers) to determine its position and dynamics. The drive system can be maneuvered using a remote controller. The base plate acts as a counterweight, keeping the center of gravity close to the ground. That keeps the wheels' traction on the inner shell of the body. So far pretty similar to the Sphero.

The main difference we find with the Sphero is the dynamic mast described by the patent. There is also a control system that keeps everything in balance, making sure the mast is always in vertical position. This, if you think about it, makes the whole mechanism behave like a miniature Segway. The arm can rotate and, according to the patent, magnetically interact with an external element. That means BB-8's head is most likely controlled via magnetic interaction. Magnets at the end of the mast and roller magnets at the base of the head.

Now let's use some 3D to show how the inner mechanism of the cutest astromech in the galaxy might look like. 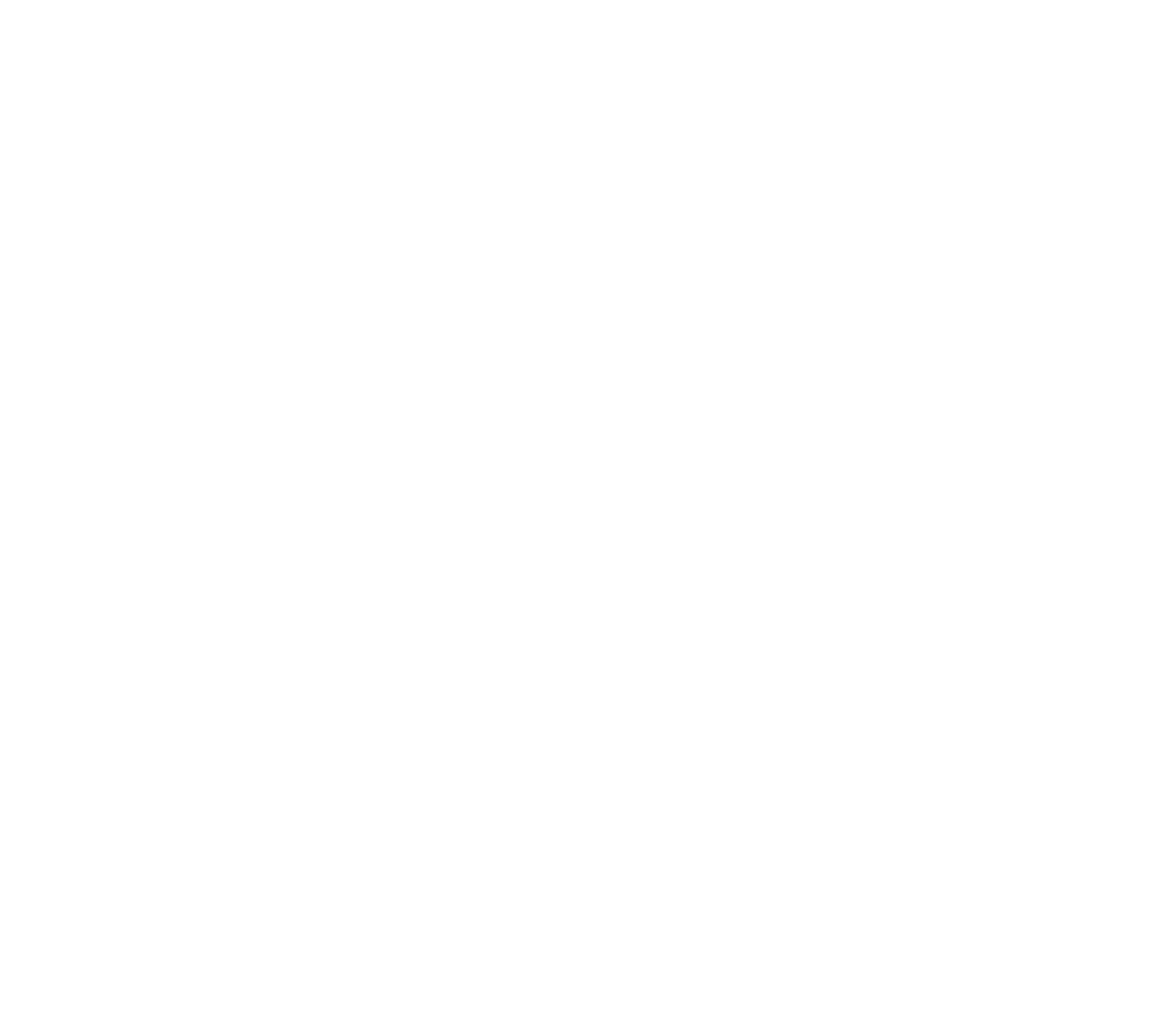 This is our best guess based on how BB-8 behaves on screen. Instead of the vertical mast described on the patent, this mechanism uses a stool type set-up (based on the AT-AT foot mechanics) which allows to freely move a magnet around the upper part of the sphere. We think that the drive system probably uses four omni wheels with ball bearings. Such configuration would allow to rotate the sphere in any direction. You can drag the model to see different angles of the mechanism.

This solution represents the most spread theory on the internet. The first one to sketch it out was Jason Torchinsky. It is the theory that better matches the information from the patent. The motorized arm has a spherical joint that allows it to flex in any direction. The head rotation motor is probably attached to the end of the mast. The head itself is probably very light and has magnetic rollers attached to the base. That would allow it to smoothly roll over the spheric body.

The exact mechanism of BB-8 remained a secret until Star Wars Celebration 2016, when the team behind the droid finally revealed these images. Check the full video here.

This site has been featured on 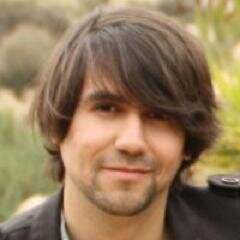 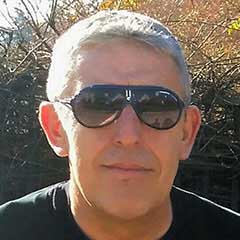 This site has been created by two Star Wars geeks from Spain. Inspired by the Droid Mechanics Lee Towersey and Oliver Steeples, we wanted to build our own astromech and learn about it in the process. Only that we come from the software side of things. All images, names and characters are property of ©Disney and ©Lucasfilm Ltd. If you want us to remove any material or make any corrections, please send us an email.